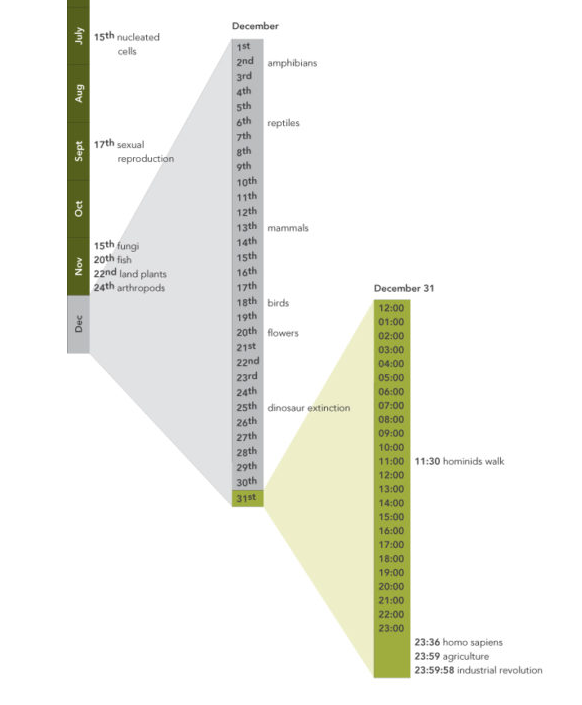 All year, we’ve been celebrating Life’s milestones on Earth’s Calendar Year, where we can see the entire 4.5 billion years of Earth’s existence condensed into one 12-month calendar.

Now, here we are on the final day of December and we’ve got A LOT to celebrate. Since Life first appeared on Earth 3.8 billion years ago (that’s February 25 on Earth’s Calendar Year), we’ve seen everything from nucleated cells to vertebrates burst onto the scene.

In December, amphibians, reptiles, mammals, birds, and Homo sapien sapiens (that’s us!) appear. In fact, humanity appears at what would be 23:36 on December 31. That’s 24 minutes before the “New Year” and roughly 3.83 billion years after Life first appeared on Earth.

That makes New Year’s Eve a perfect day to celebrate just how much we have to learn from the 3.8 billion years Life has been surviving and thriving. It’s a great reminder that we already have the blueprint for a sustainable world–on that’s existed for 3.8 billion years. And we have the power to decide what happens in the next few seconds.

As you explore Earth’s Calendar Year, take a look at our new Shop, with an entire set of new items–including a newly reduced price for our online Introduction to Biomimicry: Foundational Course. Save more than 30% with the new price of $65.

Here’s a look at what milestones we celebrated so far this year:

Here’s a more detailed breakdown of the December milestones on Earth’s Calendar Year: 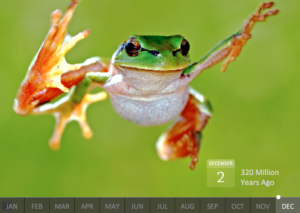 On December 2, amphibians appear after evolving from tetropods that crawled out of the water and gulped for air. For tens of millions of years, amphibians were the dominant land animals, some small and some as large as a human.

On December 6, reptiles emerge and dominate. Their thicker skins and semi-permeable eggs allowed reptiles to leave bodies of water behind so they could venture deep into dry land, unlike amphibians, which still to this day must stay near water to lay their eggs.

On December 13, mammals enter the fray. Small, nocturnal fur-bears scamper among high tree branches and find their niche as insectivores.

On December 18, birds evolve from small carnivorous dinosaurs. The first bird probably only had a few feathers, teeth, and a long bony tail. 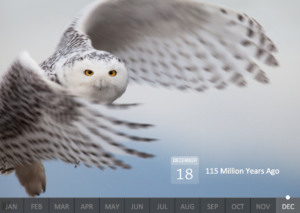 On December 15, dinosaurs are wiped out because of Earth’s unfortunate encounter with a meteor.

On December 31 at 11:30 a.m., hominids walk on two limbs. Their upright gait allowed for greater exploration of the savannah landscapes.

On December 31 at 23:26, Neanderthals appear. At 23:36, Homo sapiens sapiens evolve in Africa. For thousands of years the two species lived alongside each other, and interbred, which means some of us actually have the Neanderthal gene. 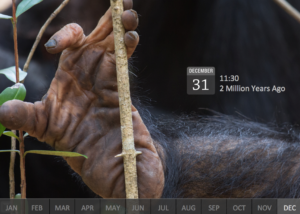 On December 31 at 23:59:58, in the last two seconds of the year, the industrial revolution occurs. There’s a population explosion among us Homo sapiens sapiens and increased globalized culture.