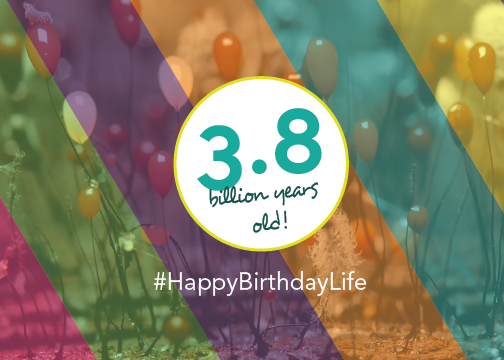 If we compress the age of Earth (4.5 billion years) into one year, Thursday, February 25, would be the day life appears. That means it was 3.8 billion years ago this week that the first single-celled organism appeared. Since then, Life has been the ultimate innovator, creating conditions that are conducive, to well, Life.

Consider this: Homo sapiens sapiens (that’s us) have been on Earth for about 200,000 years. That’s the equivalent of less than 30 minutes of Earth’s Calendar Year, with humans appearing on the scene on December 31 at 23:26!

With 3.8 billion years to celebrate, we think Life has earned the title of wise. Biomimicry is based on the premise that we aren’t the only species who calls Earth home. It’s a practice that recognizes the clues to our path forward can be found in wisdom compiled during the last 3.8 billion years. That’s why we celebrate Life’s Birthday. To remember that Life is so much bigger than you, or I, or any of us.

To celebrate, we’re saying #happybirthdaylife. Beginning February 25, our most popular biomimicry resources will be on sale.

We’ve also created a set of virtual birthday cards so anyone in the world can join the celebration. Click on your favorite card below to download and share.

Click here to learn more about Earth’s Calendar Year and view all of Life’s important milestonesLater this year, when photosynthesis appears in March and multi-cellular organisms appear in August, we’ll be celebrating again, asking you to share photos of your favorite organisms along the way.

There are 30 million other species on the planet today. Together we represent less than 1 percent of all the species that have ever lived since Life first appeared on Earth 3.8 billion years ago.

Where are we going as a species? And how will we get there? And do we stand a chance?

These are fundamental questions biomimicry asks and attempts to address with a profoundly hopeful perspective. How could we not be hopeful, knowing that the clues to drive sustainable innovation forward are found in the genius that surrounds us?