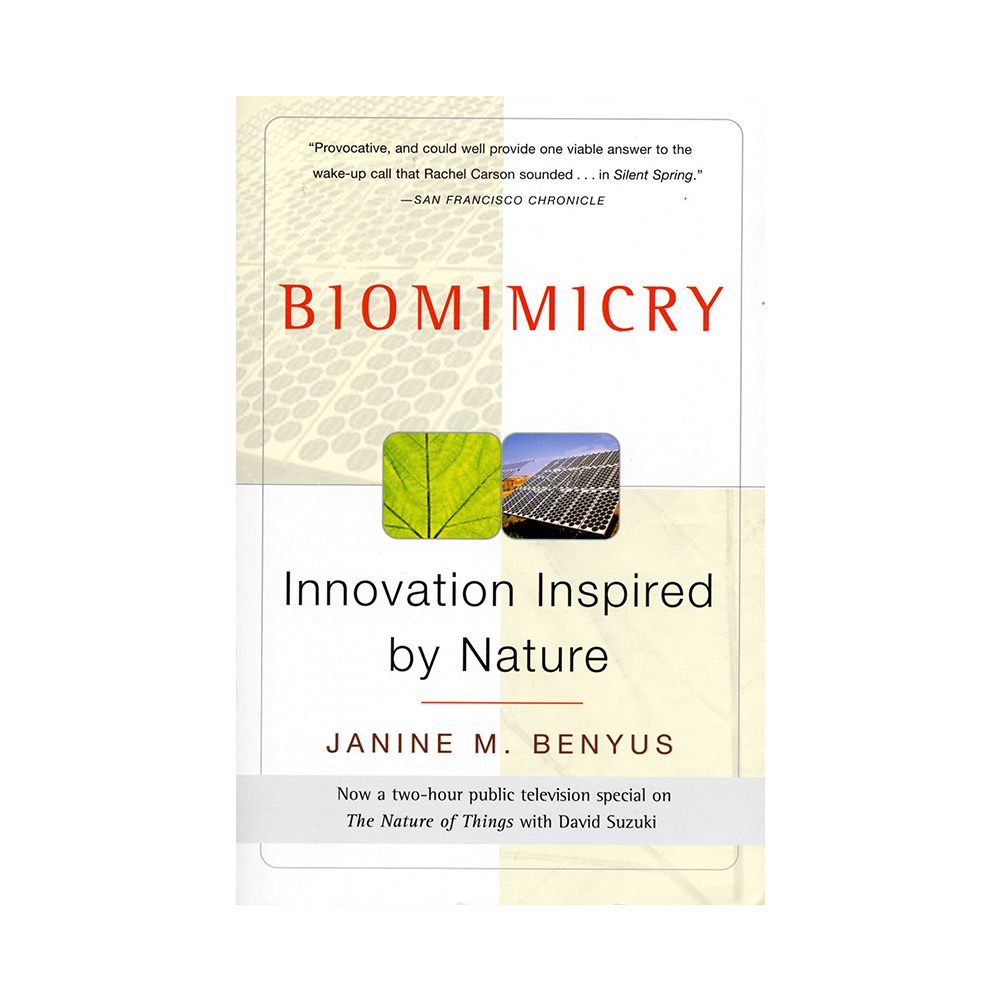 Book Description (from the Publisher)

This profound and accessible book details how science is studying nature’s best ideas to solve our toughest 21st-century problems.

If chaos theory transformed our view of the universe, biomimicry is transforming our life on Earth. Biomimicry is innovation inspired by nature – taking advantage of evolution’s 3.8 billion years of R&D since the first bacteria. Biomimics study nature’s best ideas: photosynthesis, brain power, and shells – and adapt them for human use. They are revolutionising how we invent, compute, heal ourselves, harness energy, repair the environment, and feed the world.

Science writer and lecturer Janine Benyus names and explains this phenomenon. She takes us into the lab and out in the field with cutting-edge researchers as they stir vats of proteins to unleash their computing power; analyse how electrons zipping around a leaf cell convert sunlight into fuel in trillionths of a second; discover miracle drugs by watching what chimps eat when they’re sick; study the hardy prairie as a model for low-maintenance agriculture; and more.

Janine M. Benyus is the author of four books in the life sciences, including Beastly Behaviors: A Watchers Guide to How Animals Act and Why. She is a graduate of Rutgers with degrees in forestry and writing and has lectured widely on science topics. Janine is the co-founder of Biomimicry 3.8 and she lives in Stevensville, Montana.

“It’s not ordinary for a bare-chested man wearing jaguar teeth and owl feathers to grace the pages of The New Yorker, but these are not ordinary times. While I was writing this book, Moi, an Huaorani Indian leader whose name means “dream,” traveled to Washington, D.C., to defend his Amazonian homeland against oil drilling. He roared like a jaguar in the hearings, teaching a roomful of jaded staffers where real power comes from and what homeland actually means.

Meanwhile, in America’s heartland, two books about aboriginal peoples were becoming word-of-mouth best-sellers, much to their publishers’ surprise. Both were about urban Westerners whose lives are changed forever by the wise teachings of preindustrial societies.

“What’s going on here? My guess is that Homo industrialis, having reached the limits of nature’s tolerance, is seeing his shadow on the wall, along with the shadows of rhinos, condors, manatees, lady’s slippers, and other species he is taking down with him. Shaken by the sight, he, we, are hungry for instructions about how to live sanely and sustainably on the Earth.

The good news is that wisdom is widespread, not only in indigenous peoples but also in the species that have lived on Earth far longer than humans. If the age of the Earth were a calendar year and today were a breath before midnight on New Year’s Eve, we showed up a scant fifteen minutes ago, and all of recorded history has blinked by the last sixty seconds. Luckily for us, our planet-mates–the fantastic meshwork of plants, animals, and microbes–have been patiently perfecting their wares since March, an incredible 3.8 billion years since the first bacteria.

In that time, life has learned to fly, circumnavigate the globe, live in the depths of the ocean and atop the highest peaks, craft miracle materials, light up the night, lasso the sun’s energy, and build a self-reflective brain. Collectively, organisms have managed to turn rock and sea into a life-friendly home, with steady temperatures and smoothly percolating cycles. In short, living things have done everything we want to do, without guzzling fossil fuel, polluting the planet, or mortgaging their future. What better models could there be?

–This text refers to an out of print or unavailable edition of this title.

Innovations, whether in farming, composite science, or computing, are a product of human creativity. Science writer Benyus (Beastly Behaviors, LJ 9/1/92) uses these subjects and others to demonstrate how nature’s solutions to situations have been the creative jumping-off points for individuals seeking solutions, developing, or simply revitalizing processes or products. The first seven chapters are a prelude to the final chapter, which tackles industrial ecology.

Here, Benyus proposes “ten lessons” that an ecologically astute company, culture, or economy could practice to promote a healthier existence for us all. There is no grandstanding, just readable language and a simple awe at human creativity and the uses to which it can be put. For popular science collections.?Michael D. Cramer, North Carolina Dept. of Environmental Health and Natural Resources Lib., Raleigh
Copyright 1997 Reed Business Information, Inc. –This text refers to an out of print or unavailable edition of this title.

Forget the notion that technology improves upon nature. Benyus introduces us to pioneering engineers making technological breakthroughs by uncovering and copying nature’s hidden marvels. These engineers are devising solar fuel cells as efficient as plants, fibers as tough as abalone shell, and computers as sophisticated as the brain. For Benyus, though, a technology that mirrors nature does more than enlarge human powers and gratify human ambitions.

Such a technology teaches us how to live in harmony with nature, rather than how to dominate it. Unless we learn this urgent lesson, Benyus warns, our highly unnatural and exploitative technologies will soon render the earth unfit for life. Sobering yet hopeful, this book will bring help bridge the dangerous chasm between technophiles and environmentalists. Bryce Christensen –This text refers to an out of print or unavailable edition of this title.

The natural world, says Benyus (Beastly Behaviors), has an enormous amount to teach us, if only we would “tune in”–as some scientists are beginning to do–before it’s too late. Touring the laboratories of a wide array of researchers, she reports on the emerging race to mimic natural processes (hence “biomimicry”) in the business-driven quest for better products, environmentally sound technologies and miracle drugs. The scientists speak with palpable excitement, explaining the principles behind a utopian future of unlimited possibilities: energy harnessed by simple, non-toxic molecules modeled on the principles of photosynthesis, so efficient they put our best solar cells to shame; an organic computer, thousands of times faster and more powerful than that most advanced Pentium, that emulates the principles embodied in DNA; farms with abundant yields requiring virtually no pesticides, fertilizers, or “energy inputs,” mimicking a natural ecosystem–and more.

Benyus’s shotgun approach can be disorienting, but the possible breakthroughs, the technologies behind them and the scientists themselves are invariably fascinating. And Benyus’s observations are engaging as well, bringing to her tech-oriented subject a non-didactic moral framework and an invigorating sense of wonder: “By deliberately looking for creatures that awe us, we may just stumble upon a whole new chemistry–the spoils of survival.” (June) –This text refers to an out of print or unavailable edition of this title.

Also Recommended for You