Progress is possible and it’s hopeful

We watched anxiously last year during COP21 when the historic climate change Paris Agreement was signed by United Nations members, resulting in the first unanimously accepted universal climate change agreement in history. As the effects of a human-warmed planet become more apparent and more urgent, the agreement was a welcome step toward progress.

There was even a nature-inspired buzz that added a hopeful twist to the conference.

This week, the 22nd Session of the Conference of Parties to the United Nations Framework Convention on Climate Change (COP22) convened in Marrakech, Morocco. COP22 is being called the “COP of action” and will focus on achieving the priorities of the Paris Agreement signed at COP21.

Action, of course, is crucial. As the UN continues its moves toward progress and more conversations are being held about how to not only stop carbon emissions but draw carbon down, we’ve worked throughout 2016 to help several organizations answer the question, “How can biomimicry help reverse climate change?”

Humans see carbon dioxide as the poison of our era. The rest of nature sees it as a building block.

Why? Because not only is nature inherently energy-wise and habitat-enhancing, nature’s created a balanced carbon cycle to help keep Earth’s temperature relatively stable, like a thermostat. You can watch nature breathe and take care of carbon dioxide in this video, narrated by our co-founder Janine Benyus. 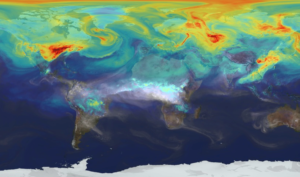 We, humans, have been affecting Earth’s thermostat balance in many ways, from deforestation to burning fossil fuels, and the affects are dire. Biomimicry looks to borrow lessons from nature that allow us to mimic its strategies, to create blueprints and design principles that can be used to draw down the excessive carbon in any aspect of human operations–and help us live in harmony with planet Earth.

Many conversations at COP21 centered on stopping emissions. As conversations advance, we’re seeing more and more potential in “carbon sink” solutions–strategies that help take carbon out of the air, by storing it or putting it to use.

Enter nature. Nature uses carbon dioxide to build. Corals use carbon to build reefs, and mollusks use carbon to manufacture their shells. Nature also uses carbon dioxide to grow. In fact, healthy soils store (or biosequester) carbon at deep levels for centuries. At the ecosystem level, nature actually gives back to its surroundings, performing services like cleaning air and filtering water. Biomimetic agriculture practices implemented at a systems level, such as mimicking tropical forests ecosystem services, could accelerate carbon drawdown.

We’re working to bring those kind biological intelligence solutions to the world.

Factories that function as a forest

Biomimicry is central to helping Interface, Inc. achieve an amazing new initiative announced this year called Climate Take Back, aiming to not just stop company carbon emissions, but to find ways to make a significant impact on reversing global warming. We’re working with Interface to help it build factories that function like forests as the global carpet manufacturer leads the way at the corporate level to help reverse climate change. 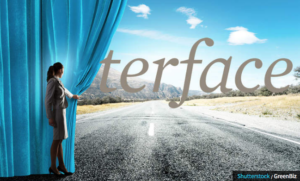 How? Ecosystems provide services–cleaning water, filtering air, creating healthy soils, and supporting biodiversity–and our work uses ecological intelligence to help clients design generous buildings and communities that do the same. Our work with Interface aims to transform two of its factories—one in the U.S. and one in Australia—to function like the nearby healthy ecosystems.

“It sounds like a tall order, and it is, but Benyus and her team have been developing the metrics and methodology for several years,” Joel Makower wrote in this GreenBiz story. “It begins with ‘ecological performance standards’—EPS for short—which measure the services provided per hectare for a given ecosystem.”

“Ecological performance is our aspirational goal,” explains Janine in the GreenBiz article. “Then there’s the performance gap, and you try to fill that. You figure out how many years you think it’s going to take you to get to full functioning of the services that you choose.”

This work could help entire business or manufacturing corridors function like a forest. Or help us build schools functions liken a forest. Or even full countries.

A toolkit for The Commonwealth

The Commonwealth is a voluntary association of 52 countries around the world–many island nations–that are home to 2.2 billion people. In its effort to find fresh perspectives for potential innovation to combat climate change, Secretary-General Patricia Scotland invited Janine to share biomimicry-based solutions at the Commonwealth’s Regenerative Development to Reverse Climate Change Workshop. 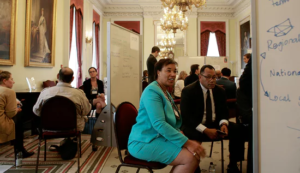 The Commonwealth secretary general, Patricia Scotland, engages in discussion with scientists at the climate-change reversal workshop in London. Photograph: Martin Godwin for the Guardian

One question they asked: Can cities designed to mimic the carbon reducing capability of trees help reverse the effects of climate change? Yes.

“If we can put pilot projects down on the ground in Commonwealth countries it will be like piloting the sort of regenerative world we need to create, making use of different biospheres, countries with different profiles,” Janine said in this Guardian article.

Ultimately, Janine is excited about the idea to work with Commonwealth pilot cities to implement cities as a forest initiatives.

Fear climate change, or do something about it

In a nod to the 3.8 billion years of solutions evolutionary R&D nature can offer us, our sister organization, The Biomimicry Institute, announced the it’s newest Biomimicry Global Design Challenge will focus this year on finding nature-inspired solutions to climate change.

The Climate Change Challenge 2017 challenges teams to create a nature-inspired innovation (a product, service, or system) that combats climate change by either helping communities adapt to or mitigate climate change impacts (i.e. those forecasted or already in motion), and/or reversing or slowing climate change itself (e.g. by removing excess greenhouse gasses from the atmosphere).

Here’s more on the Challenge:

What’s next? Working together

What will the next year hold? In the face of great uncertainty, we’re launching into 2017 with a lot of work ahead of us. But thanks to nature, progress is possible and it’s hopeful.

If you’re working to restore the climate and move toward a more sustainable world, let’s reverse climate change together.