Nucleated cells: Setting the stage for an evolutionary explosion 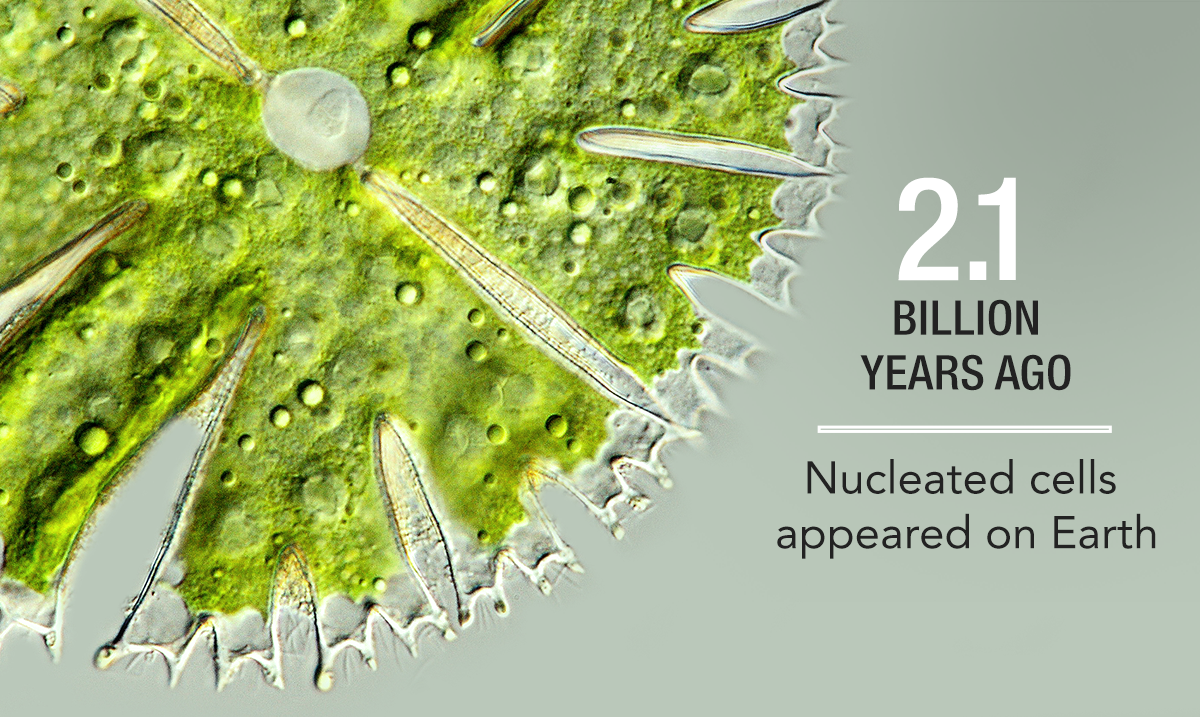 Scientists estimate that there could be up to a trillion species on Earth today! Though most are microbes, it’s an astounding amount of Life. But consider this: together, we represent less than 1 percent of all the species that have ever lived since Life first appeared on Earth 3.8 billion years ago.

So where did all this diversity come from?

It starts with the fact that nature loves to design and innovate. Nature has been conducting R&D for 3.8 billion years, and amongst a wide collection of successful and repeated strategies, nucleated cells is a big winner.

We’re celebrating the “birthday” of nucleated cells this week as a part of our year-long Happy Birthday Life celebration. In March, we told you about the day photosynthesis appeared. And, we told you about how Life first appeared on Earth in the form of a single-celled organism on February 25. That’s according to Earth’s calendar year calculations, which compress the age of Earth (4.5 billion years) into one calendar year. According to that calendar where 144 years equals one second, if Earth was “born” on January 1, then February 25 would be the day life emerged.

Scientists aren’t sure how nucleated cells emerged or what was responsible. It might have started from the way ancient bacteria learned how to make energy from the sun–through photosynthesis. Nonetheless, July 15 (2.1 billion years ago) would be the day that organisms with nucleated cells appear in the fossil record.

Since then, a lot has happened. Protists, fungi, plants, and animals (i.e. most of the Animal Kingdom) all have nucleated cells, which categorize them as Eukaryotes, organisms whose cells contain a nucleus surrounded by a membrane. Thanks to the evolution of cells, a recent estimate calculated that there are 9 million eukaryotic species on the planet–and a whopping 86 percent are still undefined.

That’s a great amount of diversity. And we have so much to learn from all the organisms that make up Life on Earth.

How nucleated cells set the stage for evolution

All Life needs is a way to feed itself. The first photosynthetic bacteria arose 3.4 billion years ago. At that time, they absorbed near-infrared light and gave off sulfur compounds instead of oxygen. These bacteria used an ancient pigment called bacteriochlorophyll.

This brief timeline shows the progression simple cells made as they evolved different ways to “eat,” from simple bacteria to land plants to mammals:

2.7 billion years ago: Cyanobacteria learned to absorb visible light using a mix of pigments: phycobilins, carotenoids, and several forms of chlorophyll. However, cyanobacteria don’t have a nucleus either.

2.1 billion years ago: Nucleated cells appear in the fossil record, setting the stage for the evolution of millions of species whose cells contain a nucleus surrounded by a membrane.

About 1.2 billion years ago: Red and brown algae arrived on the scene. They also used pigments and photosynthesis to harvest energy.

0.75 billion years ago: Green algae arrived and found their niche in the strong light of shallower water. Green algae didn’t use phycobilin pigments, though. Instead, they used a more advanced kind of chlorophyll.

0.475 billion years ago: The first land plants appeared. These were mosses and liverworts that had descended from green algae.

0.423 billion years ago: Vascular plants such as ferns, grasses, and trees were able to grow tall and capture more light.

We celebrate Earth’s Calendar Year, and the evolution of Life on Earth, because it has so much to teach us. After all that trial and error, Life has sustained itself for 3.8 billion years. The practice of biomimicry provides a way to identify and emulate the strategies these successful organisms share.

Our Biomimicry Resource Handbook: A Seed Bank of Best Practice helps frame the work Nature has done during the past 3.8 billion years to help us answer questions like, Where are we going as a species? And how will we get there? How can I use biomimicry to help inspire innovation in my field?

It sets the stage for you to take what intrigues you about Earth’s Calendar Year and begin to learn to actually DO biomimicry. So, as we celebrate the huge evolutionary success that is nucleated cells, we’re also offering the digital version of our Resource Handbook for $34.50 through July 15, 50% off its regular price.

Add the best of biomimicry to your summer reading list

Our digital version is intended to be viewed while connected to the internet on any tablet, laptop, or desktop computer and is accessed through our online learning platform.

Up next on Earth’s Calendar Year: Sexual reproduction

What’s the next major milestone on the calendar? Sexual reproduction, which “appears” on September 17, or 1.3 billion years ago. Stay tuned for more on that, before we launch into a very busy fall and winter when fungi, fish, reptiles, mammals, and more appear.

Until then, take advantage of our summer reading special and get 50% off the Biomimicry Resource Handbook.