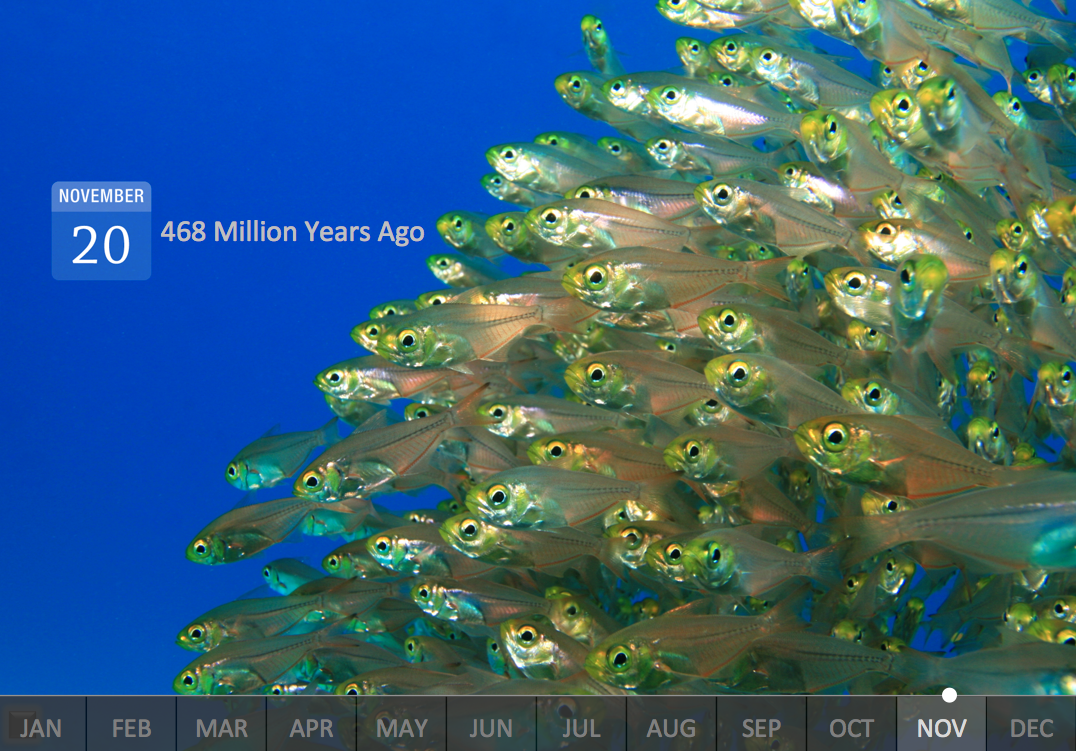 Our last Earth’s calendar year milestone left us studying a vitally important date: On September 17, sexual reproduction begins, allowing organisms to mix genes and paving the for the great diversity we see today.

As we move through November, we begin to see the results of that process, as fungi begin to populate the soil and vertebrates appear.

In fact, jawless fish are the planet’s first vertebrates and they probably evolved from a creature similar to sea squirts. That’s according to Earth’s calendar year, where 144 years equals one second. If Earth was “born” on January 1, then February 25 would be the day life emerged. On November 15, fungi colonize the soil, and on November 20, the first vertebrates appear.

This far into the year, it’s interesting to stop and think that there are now at least 30 million other species on the planet. Together we represent less than 1 percent of all the species that have ever lived since Life first appeared on Earth 3.8 billion years ago. And among those 1 percent of species are the strategies that have sustained life for billions of years.

And that sets us humans up with a vault full of 3.8 billion years of R&D.

When we introduced you to the new Biomimicry.net a couple weeks ago, we mentioned we designed the site with Life’s Principles–design lessons from nature–in mind. We strove to replicate the strategies life uses to survive and thrive, and truly make this website really is the backbone of our presence online.

We added a set of new features to help share what we do, how we do it, and why it matters.

Go explore! And read on for more on November milestones on Earth’s calendar year.

Fungi colonize the soil. The word colonize should not be used lightly here. In fact, the world’s largest organism is a honey mushroom mycelium that covers 4 square miles in Oregon.

Fish swim through the sea. Jawless fish are the planet’s first vertebrates and they probably evolved from a creature similar to sea squirts. interesting because jawless fish were our grandparents.

November 24
Arthropods crawl across the land.

Transitioning from water to land, their jointed exoskeletons helped prevent them from drying out. Arthropods are the most successful phylum on the planet in terms of population size and diversity.

Here’s a look at what milestones we celebrated so far this year:

Next up? It’s another intensely busy month for Mother Nature, as December see the introduction of more species than any other month with the appearance of amphibians, reptiles, mammals, birds, and flowers.